Posted on January 25, 2017 by southall-transition

‘Incredible Edible’ is a very successful community led urban food growing scheme which began in the market town of Todmorden in the north of England. From humble beginnings in 2007, the scheme has spread far and wide resulting in numerous Incredible Edible food growing sites across the globe.

This year we have joined forces with Ealing Transition in an attempt to bring Incredible Edible to west London. We were delighted to have Pam Warhust from Incredible Edible as our keynote speaker on Thursday 26th January at the Dominion Centre in Southall.

You can learn more about Incredible Edible at http://incredibleediblenetwork.org.uk/

This event took place at:

The Bixley Triangle is a small area next to the Grand Union Canal near the Bixley Field allotments. For many years, the Triangle had been overgrown and frequented by drug users and rough sleepers.

In 2013, Greenfields Children’s Centre artists-in-residence, Rosie Potter and Kirstie Reid, put forward a proposal to transform the triangle by clearing it and placing sculptures there. In 2015 Southall Transition, having heard about this proposal, decided we would help to make it a reality. 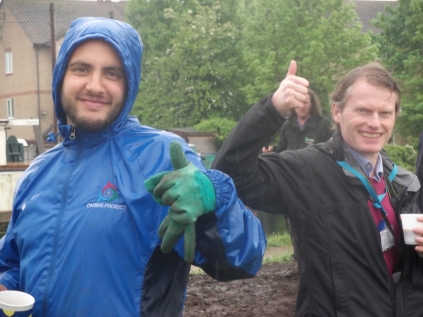 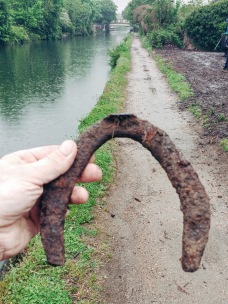 On Tuesday 10th May, we joined our partners to finish the clean up process before reseeding the area with help from children from Greenfields Children’s Centre and regulars from Southall Community Garden.

It was a very wet day so we were pleasantly surprised at the good turn out. We were informed that the weather was actually perfect for reseeding. The Norwood Green councillors, Cllr Rajinder Mann, Cllr Gurmit Mann and Cllr Mohammad Aslam also came along and helped to plant the first of three fruit trees which were graciously donated by the Hangot group.

We are also considering planting some fruiting hedges and still hope to see the sculptures materialise at some point in the not too distant future.

Southall Transition are very grateful to all our partners and volunteers for helping to transform this site for the benefit of the community.

Posted on March 10, 2016 by southall-transition

On 5th March 2016 we successfully completed phase 1 of the Southall Orchard Project. The Mayor of Ealing, Cllr Harbhajan Kaur Dheer returned to unveil a new ‘interpretation board’. We were also joined by the Mayor’s consort and Deputy Leader of Ealing Council, Cllr Ranjit Dheer,  Varendra Sharma, MP for Ealing Southall, Dr Onkar Sahota, GLA member for Ealing and Hillingdon and Cllr Swarn Kang

In addition to help from the Ealing Park Rangers and the Tree Council, we were again joined by Southall Community Alliance for this final stage of planting. The real stars however were the many local people who came from all over Southall and nearby towns. Luckily the damp weather did not dampen the mood of those who attended and actually had great fun working together in an outdoor setting. It was particularly uplifting to see so many young and elderly people showing the way, in how communities can look after their towns and environments.

Susan Wyatt, Community Champions Coordinator at Ealing Council runs the ‘Tree Warden’ scheme for the borough. She said “there was a lot of camaraderie and fun to be had in just a few hours” and “what a legacy to leave to future generations!”.

As a result of every ones efforts, Southall Park now boasts 44 fruit/nut trees and over 2000 fruiting hedges of various varieties. We now look forward to seeing the community benefit when it becomes time to harvest.

Posted on February 16, 2016 by southall-transition

The Southall Park Orchard nears completion. On 6th February more fruiting hedges were planted in another section of the park. These were complimented by apple and pear trees. Thanks again to all our fantastic volunteers.

Phase one of the Southall Orchard Project will be completed on 5th March 2016. The Mayor of Ealing, Harbhajan Kaur Dheer will return for the official opening of the community orchard.

Please join us at Southall Park from 11am. Registered volunteers will receive free refreshments.

Posted on February 3, 2016 by southall-transition 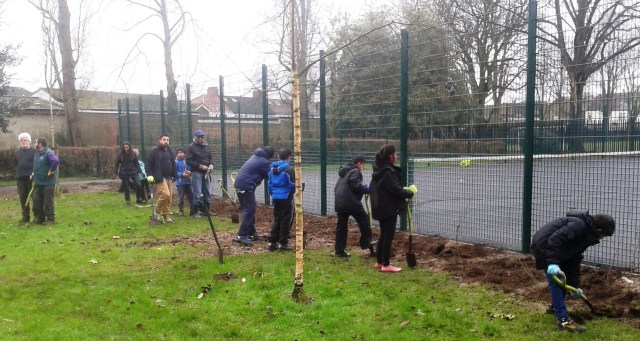 On Saturday 23rd January our volunteers were hard at work again. The next phase in the creation of the Southall Park Orchard entailed the planting of shrubs around the periphery of Villiers High School and their Multi Use Games Area. Students from the school were on hand to assist.

The Southall Park Community Orchard is now well under way but not yet complete. More trees are coming to Southall Park. The next planting days are on:

A large number of fruit trees and fruiting hedges will be planted.

Phase one of the Southall Orchard Project will be completed and the Southall Park Community Orchard will be officially opened by The Mayor of Ealing and other dignitaries. A new ‘interpretation board’ will also be unveiled. We expect over a hundred people to attend this event.

Posted on December 20, 2015 by southall-transition

On 5th December 2015 Southall Park was the venue for the planting of our first community orchard making the Southall Orchard Project a tangible reality.

The windy conditions did not deter the incredibly enthusiastic  volunteers. Over a hundred people, most of them local, turned up to help.  Cllr Julian Bell, Leader of the Council said “There was a real show of community spirit”.

In addition to help from Ealing Park Rangers and The Tree Council, we were also joined by members of  Southall Community Alliance , HANGOT, Ealing Council’s cabinet, local councillors and Dr Onkar Sahota of the London Assembly.

Pauline Buchanan Black, from The Tree Council enthusiastically declared  “The energy present could have powered half the national grid!”

By the end of the day the crowd had planted hawthorn, rosa rugosa, blackcurrants, raspberries, redcurrant, gooseberries, plum, apple, vine, kiwi and a number of fruit trees in the vicinity of the old rose garden.

Jitin Dixit, owner of Subway Southall presented a cheque for £1000 to help further the project.

In addition to planting fruiting hedges and trees, many of those present joined the Sikh Scouts and members of Southall Transition’s ‘Community Clean Up’ group on a litter pick around the park.

The Community Clean Up Group in action. (Photo by James Morton)

Following a brief speech from our Business Liaison Manager, Jags Sanghera, the orchard was officially opened by the Mayor of Ealing, Cllr Harbhajan Kaur Dheer.

The Southall Park Community Orchard is now well underway but not yet complete. More trees are coming to Southall Park. The next planting day is Saturday 23rd January 2016. We will again meet by the globe at 11am.

To learn more about the Southall Orchard Project and get involved, please click here.

Posted on October 8, 2015 by southall-transition

What is a Disco Soup?
Disco Soup is an international grassroots movement to raise awareness of food waste. Disco Soup originates from Slow Food Youth Germany, who devised the concept – “Schnippel Disko” – preparing otherwise-wasted vegetables within a party-like atmosphere, which has since been replicated from Paris to Nairobi to New York. Disco Soup events have the goal of shedding light on the food waste problem, sensitizing people and having fun through cooking with food that would otherwise have gone to waste, sharing food, having fun and listening to music.

The closest Disco soup which has been held was in Kilburn in Brent. It brought together about 150 people from across the community. In the UK, food waste campaigner, Tristram Stuart has been an advocate of holding Disco Soup events in order to help get the community thinking about food waste.

We agree with Tristram, so were delighted when our friends at ‘The Rubbish Diet‘ approached us with a plan to raise awareness of this important issue. On 24th October we joined forces to hold our own Disco Soup. However, this being Southall, we thought it was good to put a bhangra spin on things.

The aim of the event was:

Posted on June 7, 2015 by southall-transition

At Southall Transition we believe the community has the power to solve many of its own problems. On the day, groups emerged around the themes that were identified from the feedback at the Grand Launch in March. These groups began to explore practical steps towards tackling issues such as food-growing, tree-planting, healthy lifestyles and more.

To find out more about these groups and how to get involved, make sure you’re signed up to receive our mailings.

We’re grateful for the use of St John’s Community Hall in Havelock Road for this event.

The Grand Launch of Southall Transition took place n Sunday 22 March. We took over the Dominion Centre with activities, information and food. The programme was as follows:

The following groups and organisations were also in attendance:

The Story of Stuff

Posted on October 3, 2014 by southall-transition

We have a problem with Stuff. We use too much, too much of it is toxic and we don’t share it very well. But that’s not the way things have to be. Together, we can build a society based on better not more, sharing not selfishness, community not division.

The Story of Stuff is a short animated documentary about the life cycle of material goods. The documentary is critical of excessive consumerism and promotes sustainability.

This film was screened as a part of the ‘Story of Stuff’ event on Thursday 16th October 2014.

The focus of the night was to help people to generate less waste & also save money. In addition to the movie there were up-cycling demos, discussion, free food & drink, & more besides. There were even some ‘goodies’ given away.

This FREE event was jointly run by Southall Transition, Ealing Council and HelpLink and was hosted at:

Posted in Uncategorized | Leave a comment
Blog at WordPress.com.